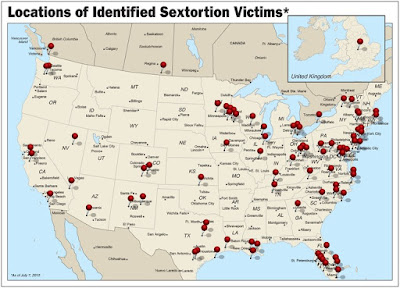 The FBI website reports on the growing crime of "sextortion"and asks for the public's help.


Ashley Reynolds was a happy 14-year-old who loved sports, did well in school academically and socially, and enjoyed keeping a journal she intended her “future self” to read. But what happened in the summer of 2009 was so devastating that she couldn’t bring herself to record it in her diary—or speak about it to anyone.
She had become the victim of sextortion, a growing Internet crime in which young girls and boys are often targeted. Her life was being turned upside down by an online predator who took advantage of her youth and vulnerability to terrorize her by demanding that she send him sexually explicit images of herself.
After several months, Ashley’s parents discovered what was happening and contacted the National Center for Missing & Exploited Children (NCMEC). Ashley and her parents later supported the FBI investigation that led to the arrest of 26-year-old Lucas Michael Chansler, who last year pled guilty to multiple counts of child pornography production and was sent to prison for 105 years—but not before he used the Internet to victimize nearly 350 teenage girls. The majority of those youngsters have not yet been identified.
That’s why the FBI is requesting the public’s help—and why Ashley has come forward to tell her story—so that Chansler’s victims can be located and will know, as Special Agent Larry Meyer said, “that this dark period of their lives is over.”
Meyer, a veteran agent in the FBI’s Jacksonville Division who investigates crimes against children, explained that 109 of Chansler’s victims have been identified and contacted so far, leaving approximately 250 teens “who have not had closure and who probably haven’t obtained counseling and other help they might need.” He noted that Ashley is a brave person with a supportive family “and has been able to use this experience to make her stronger.” Unfortunately, that has not been the case for all the girls, some of whom have dropped out of school and tried to end their lives.
You can read the rest of the piece via the below link:
https://www.fbi.gov/news/stories/2015/july/sextortion/sextortion?utm_campaign=email-Daily&utm_medium=email&utm_source=fbi-top-stories&utm_content=448606