My Philadelphia Inquirer Review Of 'Rescue At Los Banos: The Most Daring Prison Camp Raid Of WWII' 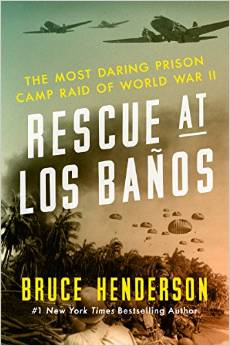 My review of Bruce Henderson's Rescue at Los Banos: The Most Daring Prison Camp Raid of WWII appears in today's Philadelphia Inquirer.

I was a frequent visitor to the Philippines while serving as an 18-year-old sailor aboard the USS Kitty Hawk during the Vietnam War in 1971. On one of my shore leaves, I traveled to Manila, and the Manila Memorial Cemetery, where more than 17,000 Americans and Filipinos who died fighting Japanese forces during World War II are buried. I was impressed by the cemetery's mosaic wall maps of many great battles. One such battle was the raid on Los Banos.

This year marks the 70th anniversary of that raid, which many historians consider one of the greatest military rescues of all time. "I doubt that any airborne unit in the world will ever be able to rival the Los Banos prison raid," said retired U.S. Army Gen. Colin Powell. "It is the textbook airborne operation for all ages and all armies." Bruce Henderson offers a fine account in Rescue at Los Banos.

Note: In 1945, years before I sailed into the Philippines on the aircraft carrier the USS Kitty Hawk, my father and other U.S. Navy Underwater Demolition Team (UDT) frogmen hit the beaches of the Japanese-held Philippines just ahead of the allied invasion force.

Thanks to my father and men like him, the Japanese were defeated and the Philippine Islands were liberated.
Posted by Paul Davis at 12:17 PM