The Billion Dollar Spy: A True Story Of Cold War Espionage And Betrayal 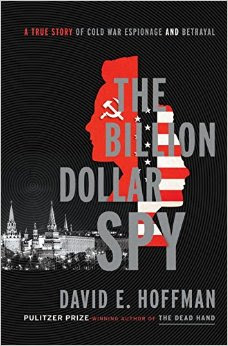 
A question frequently asked by hard-core critics of the American intelligence community is, “What are we getting for our money? Does the product of our spies warrant what we spend?”

In a nutshell, Yes. Such is the conclusion of David Hoffman’s account of perhaps the most productive spy in CIA history, Adolf Tolkachev, a Soviet aeronautical engineer. Over six years, from 1978 to 1985, he gave CIA officers thousands of pages of top-secret documents. The key revelations dealt with two key Soviet weapons systems: ground radars that defended against attacks, and radars on warplanes that provided the capacity to attack others.

Gus Hathaway, one of the CIA officers who handled Tolkachev, asked the Air Force how much Tolkachev’s intelligence saved the United States on research and development costs. The answer was “somewhere in the neighborhood of $2 billion.”

Further, the intelligence revealed just how far the Soviets lagged behind the United States in weapons development — permitting President Ronald Reagan to enter into arms agreements knowing that American national security would not be endangered. What the military learned also potentially saved the lives of American pilots who might have faced the Soviets in the event of war.

Mr. Hoffman, a Pulitzer Prize-winning journalist, benefited from access to CIA cables on the Tolkachev operation — material from the clandestine service seldom seen by outsiders. He also gained access to the principal officers. The result is a rare inside look at one of the more important CIA operations ever, even the tradecraft that made Tolkachev’s spying possible. (Studies in Intelligence, an in-house CIA journal, published an unclassified account in 2003.)

A key part of the book is how a handful of talented CIA officers broke down decades-old barriers that had made Moscow an intelligence backwater. Mr. Hoffman’s opening declaration might surprise many Americans. “In the early years of the Cold War ,” he writes, “the Central Intelligence Agency harbored an uncomfortable secret. The CIA had never really gained an espionage foothold on the streets of Moscow. “


There were several reasons. The closed society of the USSR, policed by the ever-watchful KGB, made contacts perilous. Several Soviets who volunteered or were recruited abroad continued to report information when they returned home. But, as Mr. Hoffman writes, “for the most part, the CIA did not have to lure agents into spying in the heart of darkness.”

http://www.washingtontimes.com/news/2015/jul/5/book-review-the-billion-dollar-spy-a-true-story-of/?utm_source=RSS_Feedutm_medium=RSS
Posted by Paul Davis at 6:53 AM