My Crime Beat Column: A Look Back At The Untold Story of The Navy SEALs 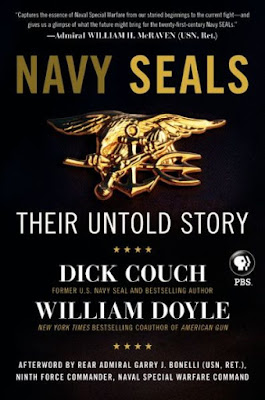 Although Navy SEALs: Their Untold Story (William Morrow) is a companion book to the documentary that aired on PBS, there are enough thrilling stories here for a dozen feature films and TV dramas.


With the rescue of Captain Philips from Somali pirates, the raid on bin Laden's compound and other highly publicized missions, Navy SEALs have become America's heroes. Clint Eastwood's film American Sniper, which featured Bradley Cooper as the late Navy SEAL Chris Kyle, was a huge success at the box office.


Navy SEALs: Their Untold Story traces the evolution of the special operation warriors from their World War II frogmen predecessors to the present day. Dick Couch, a former Navy SEAL, Vietnam veteran and author of several nonfiction books about the SEALs, as well as several thrillers that feature SEALs, co-authored the book. His co-author is William Doyle, the co-author of  American Gun: A History of the U.S. in Ten Firearms, written with the aforementioned Mr. Kyle.


Realizing that SEALs are a secretive, clannish group, the authors contacted the Navy's Special Warfare Command and asked for their assistance as well as a security review of their book prior to publication. Once the Navy command agreed, many SEALs spoke to the authors. The book was also reviewed and cleared by the CIA.


The authors conducted interviews with more than 100 SEALs and Naval Combat Demolition Unit (NCDU) and Underwater Demolition Team (UDT) members from WWII. They also viewed thousands of pages of declassified files that the command made available to them.


One good story in the book features a NCDU "Demolitioneer" who was one of the first men on Omaha Beach on D-Day. Another story is about the UDT frogmen who cleared the Japanese-held beaches prior the U.S. Marine assaults. The "Naked Warriors" wore face masks and swim trunks and were armed only with a Ka-Bar knife and explosives in a pouch. We also learn about a later UDT frogman who conducted a mine recovery operation during the Korean War.


The authors explain how in 1960 the Chief of Naval Operations, Admiral Arleigh Burke, ordered his staff to identify Navy units that could be geared towards small-scale warfare, in contrast to the military' nuclear response to a world crisis. The staff recommended the UDT.


"They were a ready-made commando force with strong talents for speed, mobility, sabotage, clandestine infiltration, and small-team tactics, all talents that were ideal for the new mission," the authors write. "A key "birth document " dated March 10, 1961, was sent to Admiral Burke by Rear Admiral E. Gentner, director of the Navy's Strategic Plans Division, in which he proposed an improved "Naval Guerrilla/Counter-guerrilla Warfare" capability. He laid out the specifics, which soon became the foundation of the SEALs and Naval Special Warfare that endured for the next fifty years and beyond: "One unit is proposed under the Pacific and Atlantic amphibious commanders and will represent a center or focal point through which all elements of this specialized Navy capability (naval guerrilla warfare) would be channeled." Later in the memo, the new force was given its name: An appropriate name for such units could be 'SEAL' units, SEAL being a contraction of  SEA, AIR, LAND, and thereby indicating an all-around, universal capability."

Mr. Couch tells his own SEAL story about a rescue mission during the Vietnam War, and another interesting story in the book involves a team of SEALs on loan to the CIA who trained anti-Castro Cuban frogmen and saboteurs as part of "Operation Mongoose," President Kennedy's plan to take out Fidel Castro. We learn that the SEALs accompanied the anti-Castro Cubans on one mission to Cuba that destroyed Soviet missile-boats at the Isle of Pines.

The book also takes the reader along on SEAL missions during the conflicts in Grenada, Panama, the Gulf War, Iraq and Afghanistan.


"Navy SEALs: Their Untold Story is clear, concise, and above all factual," retired Admiral William H. McRaven, a former SEAL and former Commander of the U.S. Special Operations Command, wrote in a blurb for the book. "If you want to understand today's Navy SEALs you must have an appreciation for the warriors and the missions that shaped our legacy. Dick Couch and William Doyle's book captures the essence of Naval Special Warfare from our storied beginnings to the current fight and gives us a glimpse of what the future might bring for the 21st Century Navy SEALs."

Navy SEALs: Their Untold Story is a well-written, well-documented and fast-paced book. It is a must for readers of  military history and for those interested in a good story. 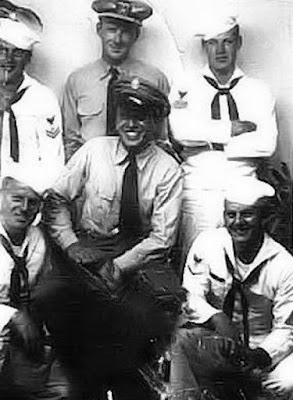 Note:  My late father, Edward M. Davis (seen in the center of the above photo), was a Navy chief and a UDT frogman in WWII. You can also read my Counterterrorism magazine piece on the history of the Navy SEALs via the below link:
http://www.pauldavisoncrime.com/2015/04/a-look-back-at-history-of-us-navy-seals.html
Posted by Paul Davis at 1:34 PM