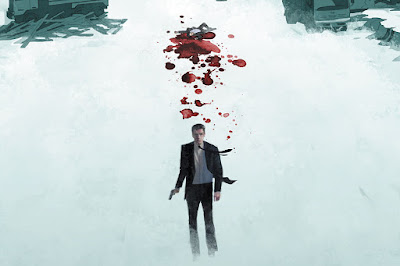 Alison Flood at the British newspaper the Guardian offers a piece on the upcoming James Bond comic series.


Warren Ellis is promising to deliver the “original, brutal, damaged” James Bond of Ian Fleming’s novels in a new comic book series out later this year, the first in more than two decades.
Launching in November with a six-issue story arc called VARGR, the series will see 007 back in London after a “mission of vengeance” in Helsinki, where he takes on the workload of a fallen agent. “But something evil is moving through the back streets of the city, and sinister plans are being laid for Bond in Berlin,” said publisher Dynamite.
Ellis, acclaimed author of the novel Gun Machine and the graphic novel Red, was announced as the writer of the James Bond 007 comic book series on Monday. With artwork by Jason Masters, who has worked on Batman Incorporated and Guardians of the Galaxy, the series will be published by Dynamite, in partnership with the Fleming family company Ian Fleming Publications.
Ellis called Fleming’s Bond “an icon”, and said that it was “a delight to tell visual narratives with the original, brutal, damaged Bond of the books”. The author has long been a fan of Fleming’s novels: comics website Bleeding Cool pointed to his comments in 2002, when the author wrote that the spy would be one of the only existing characters he would be interested in taking on.
... “He is England’s blunt instrument of international assault – the spiteful, vicious bastard of a faded empire that still wants the world to do as it’s bloody well told.”

You can also read my Crime Beat column on a James Bond graphic novel via the below link: