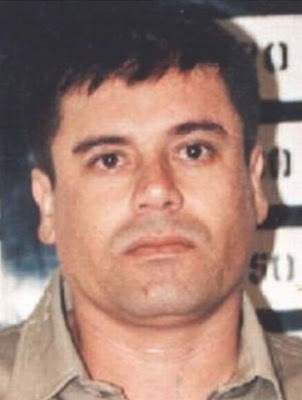 The Philadelphia Inquirer offers a report on the prison break of a notorious Mexican drug kingpin.


MEXICO CITY (Reuters) - Mexico's most notorious drug lord Joaquin "El Chapo" Guzman broke out of a high security prison on Saturday night for the second time, escaping in a tunnel built right under his cell, and heaping embarrassment on President Enrique Pena Nieto.

The kingpin snuck out of the prison through a subterranean tunnel more than 1.5 km (1 mile) long that ended in a building site in the local town, National Security Commissioner Monte Alejandro Rubido told a news conference on Sunday.

Guzman, who had bribed his way out of prison during a previous escape in 2001, was seen on video entering his shower area at 8.52 p.m. on Saturday (0152 GMT Sunday), then disappeared, the National Security Commission (CNS) said.

Wanted by U.S. prosecutors and once featured in the Forbes list of billionaires, Guzman was gone by the time guards entered his cell in Altiplano prison in central Mexico, the CNS said.

"This is going to be a massive black eye for Pena Nieto's administration," said Mike Vigil, former head of global operations for the U.S. Drug Enforcement Administration.

"I don't think they took into account the cunning of Chapo Guzman and the unlimited resources he has. If Chapo Guzman is able to make it back to the mountainous terrain that he knows so well in the state of Sinaloa ... he may never be captured again."