The CIA Officer Who Recruited His Son To Spy For Russia 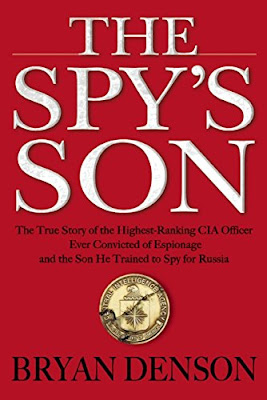 Bryan Denson, author of The Spy's Son: The True Story of the Highest-Ranking CIA Officer Ever Convicted of Espionage and the Son He Trained  to Spy for Russia, offers a piece about the former CIA officer, traitor and spy in the Irish Times.


In one of the most bizarre twists in America’s war on terrorism, the CIA assigned veteran operations officer Harold James “Jim” Nicholson to run a counter-terrorism branch in the heart of its Virginia headquarters. This was in 1996, more than five years before the attacks of September 11, 2001, as the Central Intelligence Agency worked around the clock to draw beads on disparate cells of Middle East terrorists - groups that would later coalesce into al-Qaeda.
By all appearances, Nicholson’s installment as chief of the Other World Terrorism branch was a clever move to pit one of the agency’s rising stars, a so-called “blue flamer”, in a tilt against terrorists. But the CIA’s installment of Nicholson as chief of the highly specialised counter-terrorism unit came under the most extraordinary of circumstances: He was secretly under investigation for espionage.
The FBI and CIA had begun to suspect Nicholson of spying for Russia in the mid-1990s. So those in charge of the joint spy catching operation engineered a plan to get him reassigned from The Farm (the agency’s covert training center, where he taught tradecraft to young spies) to his new position at CIA headquarters so they could keep an eye on him. The FBI secretly installed a tiny surveillance camera above Nicholson’s desk, bugged his home, searched his office and minivan, and tailed him night and day.
Their target and his subordinates performed authentic work to identify and defeat foreign terrorist cells. But Nicholson’s hand-picked deputy - CIA officer John Maguire, a veteran counterterrorism operative - secretly served as the eyes and ears of the covert spy catching venture. Maguire reported his boss’s every move to FBI investigators to help them take down the agency’s latest Judas.
In my new book (The Spy’s Son: The True Story of the Highest-Ranking CIA Officer Ever Convicted of Espionage and the Son he Trained to Spy for Russia), I point out in Maguire’s own words the outrageous irony of the CIA’s predicament: “We’re on the front end of the (counter-jihadist) spear, and we have a spy that’s the boss.”
You can read the rest of the piece via the below link:
http://www.irishtimes.com/culture/books/the-cia-officer-who-recruited-his-son-to-spy-for-russia-1.2269781
You can also read veteran journalist and author Joseph C. Goulden's review of The Spy's Son in the Washington Times via the below link:
http://www.pauldavisoncrime.com/2015/05/the-spys-son-true-story-of-highest.html
Posted by Paul Davis at 8:50 AM