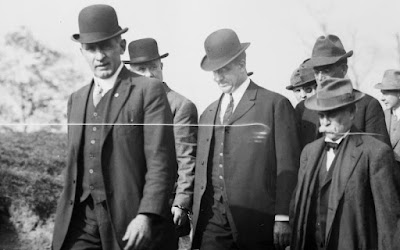 Edward Conlon, former NYPD detective and the author of Blue Blood, offers an interesting piece at the Daily Beast that looks back at the only NYPD officer ever sentenced to death.


When it came to scandal, the Tammany leader Big Tim Sullivan said, New York was a nine-day town. But in the case of the murder of his friend Herman “Beansie” Rosenthal, a gangster and gambling house proprietor, Sullivan’s adage proved spectacularly untrue. Charles Becker, an NYPD lieutenant, was one of five men convicted of the murder, and he remains the only New York City police officer sent to the electric chair. Though the case was sensational and the conviction a travesty, Becker is little remembered today, and defended less. Both failures are all the more disgraceful because the prosecution was undertaken for a noble cause, that of political reform in general and police reform in particular.
As with any criminal trial that is transformed into social allegory, the cause trumped the case; facts that contradicted it were held not as false but as heretical, demanding suppression instead of debate. Later generations seeking lessons from the past are likelier to dwell on episodes of clear-cut triumph or transgression. Who wants to commemorate a battle without heroes?
You can read the rest of the piece via the below link:
http://www.thedailybeast.com/articles/2015/07/30/the-story-of-the-only-nypd-officer-ever-sentenced-to-death-100-years-ago-today.html
Posted by Paul Davis at 10:39 PM