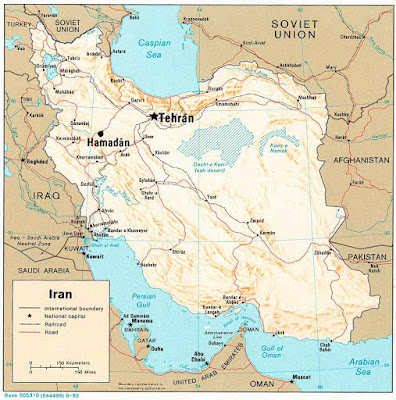 
Back in 2009, President Obama vowed to “take concrete steps toward a world without nuclear weapons.” Now he and Secretary of State John Kerry have instead guaranteed a world with more nukes than ever — and in the most dangerous hands, to boot.
No deal would’ve been far better than the dangerous and misguided one the White House and Tehran are now celebrating.
Indeed, had you told Obama and Kerry two years ago that an Iran accord would contain the conditions outlined Tuesday, they would’ve laughed you out of the room.
But Washington, desperate for an agreement, gave way on one issue after another until — as Sen. Bob Menendez (D-NJ) rightly noted — Obama’s strict red lines all “turned into green lights.”
Simply put, this deal doesn’t end Iran’s nuclear program — it preserves it.
You can read the rest of the piece via the below link:
http://nypost.com/2015/07/14/obamas-iran-nuke-deal-far-far-worse-than-no-deal-at-all/

Note: The above map of Iran was provided by the CIA.
Posted by Paul Davis at 8:19 AM