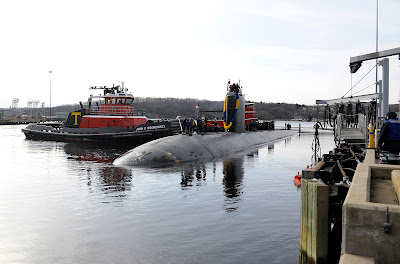 Deirdre M. Daly, United States Attorney for the District of Connecticut, today announced that a federal grand jury in Bridgeport returned an indictment yesterday charging KRISTIAN SAUCIER, 28, of Arlington, Vermont, with unlawfully retaining photos taken inside restricted areas of a nuclear attack submarine, and obstructing the investigation of this matter.

As alleged in court documents, from September 2007 to March 2012, SAUCIER served as a machinist’s mate aboard the USS Alexandria, which is a U.S. Navy Los Angeles-class nuclear attack submarine based at the Naval Submarine Base New London in Groton, Connecticut.

On at least three separate dates in 2009, SAUCIER used the camera on his personal cellphone to take photographs of classified spaces, instruments and equipment of the USS Alexandria. In March 2012, SAUCIER’s cellphone was found at a waste transfer station in Hampton, Connecticut.

After SAUCIER was interviewed by the Federal Bureau of Investigation and Naval Criminal Investigative Service in July 2012, SAUCIER destroyed a laptop computer, a personal camera and the camera’s memory card. Pieces of a laptop computer were subsequently found in the woods on a property in Connecticut owned by a member of SAUCIER’s family.

SAUCIER is currently enlisted in the U.S. Navy as a Petty Officer First Class assigned to the Naval Support Activity Base, Saratoga Springs, New York.

U.S. Attorney Daly stressed that an indictment is not evidence of guilt. Charges are only allegations, and a defendant is presumed innocent unless and until proven guilty beyond a reasonable doubt.

This matter is being investigated by the Federal Bureau of Investigation and the Naval Criminal Investigative Service. The case is being prosecuted by Assistant U.S. Attorneys Vanessa Richards and Jacabed Rodriguez-Coss, with the assistance of Justice Department’s National Security Division and the U.S. Attorney’s Office for the Northern District of New York.
Posted by Paul Davis at 6:22 AM