The Spy's Son: The True Story Of The Highest-Ranking CIA Officer Ever Convicted Of Espionage And The Son He Trained To Spy For Russia 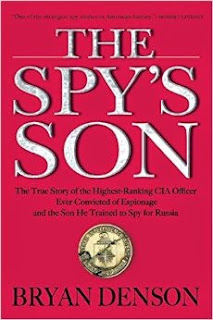 Of the American intelligence and military officers who spied for the Soviet Union and successor Russia, who deserves the most scorn for odious conduct? Topping any list would be Aldrich Ames of the CIA, whose treachery cost the lives of sources working for the United States, followed closely by Robert Hanssen of the FBI, who gave the KGB the bureau’s “game plan” for tracking spies.

After reading Bryan Denson’s superbly entertaining and informative book, my own choice is James Nicholson, a CIA officer who not only spied for the Russians, but dragged his young son into the messy vortex of treachery — and prison.

Note: I would add John Walker to Mr. Goulden's list of spies with odious conduct. Walker not only dragged his son into the traitor and spy business, he also dragged his brother and best friend in. All three, like Walker, ended up in prison. Walker also tried to convince his pregnant daughter to have an abortion so she could join the Army and commit espionage for cash. Wisely, she declined.
Posted by Paul Davis at 3:35 PM