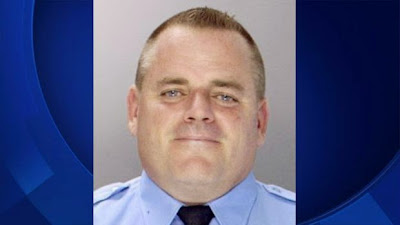 On cross-examination, Assistant U.S. Attorney Maureen McCartney asked former Officer Michael Spicer (seen in the above photo) about an allegation contained in "Episode #4" of the government's indictment of the rogue cops.

On Nov. 26, 2007, the indictment charged, while hanging out at drug dealer Michael Cascioli's 19th floor apartment on City Line Avenue, Officers Spicer, Linwood Norman, Perry Betts and Jeffrey Walker allegedly took money from the drug dealer's nightstand and "used it to purchase pizza" for the four cops "without [Cascioli's] permission."

"That would have been a staple of our diet," Spicer conceded with a half-smile from the witness stand when asked about the pizza.

Sensing weakness, the prosecutor pressed in for the kill. Who bought the pizza, she wanted to know.

It was exchanges like this during the three-hour cross-examination of Spicer, the only one of six defendants to take the stand, that had the defense camp smiling and laughing when it was all over.