Pizza Connection II: New York Mobster Held Over Cocaine Smuggling Ring With Italian Mafia Boasted To Wife He ATE The Heart And Kidney Of A Rival And Wanted To Dissolve Two Others In Acid, Wiretaps Reveal 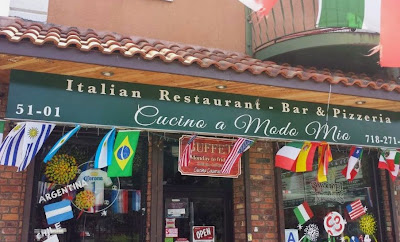 Like the Cosa Nostra pizza connection case in the 1980s, another powerful Italian organized crime group, the N'drangheta, has been caught using an Italian restaurant in America to smuggle and distribute drugs.
Hannah Roberts at the British newspaper the Daily Mail offers a piece on the case.
A savage mafia mobster arrested in New York for his part in a transcontinental cocaine trafficking network boasted to his wife that he ate the heart and kidney of a rival who owed him money, it is alleged.
Gregorio Gigliotti was the alleged U.S. broker between the Ndrangheta - Italy's richest and most brutal organized crime syndicate - the New York mafia families and the South American drug cartels.
The group's turnover is $70 billion (£44billion) a year, according to a study last year, more than Deutsche Bank and McDonald's combined.
A pizzeria in Queens run by Gigliotti and his wife was allegedly the centre of a ring that smuggled cocaine in the linings of cardboard boxes containing cassava and tropical fruit.
In a raid in March police seized $100,000 (£65,000), six pistols, a rifle, cocaine and marijuana at the premises.
Gigliotti was arrested after a 10 month-surveillance operation in which he emerged as a violent gangster with terrifying psychopathic tendencies, including cannibalism and threatening to dissolve competitors in acid.
You can read the rest of the piece and view photos and a video via the below link:
http://www.dailymail.co.uk/news/article-3073803/New-York-mobster-held-cocaine-smuggling-ring-Italian-mafia-boasted-wife-ATE-heart-kidney-rival-wanted-dissolve-two-acid-wiretaps-reveal.html 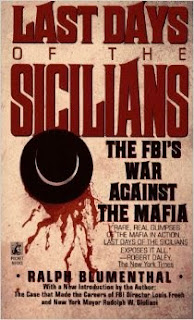 If you would like to learn about the first pizza connection case, I recommend Ralph Blumenthal's The Last Days of the Sicilians: The FBI's War Against the Mafia.
Posted by Paul Davis at 7:54 PM