From The FBI Files: The Life And Death Of Bonnie & Clyde 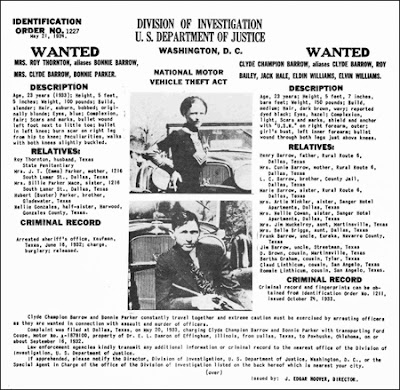 The FBI website offers a piece with photos on the FBI's hunt for the notorious criminals Bonnie & Clyde.


Clyde Champion Barrow and his companion, Bonnie Parker, were shot to death by officers in an ambush near Sailes, Bienville Parish, Louisiana on May 23, 1934, after one of the most colorful and spectacular manhunts the nation had seen up to that time.
Barrow was suspected of numerous killings and was wanted for murder, robbery, and state charges of kidnapping.

The Federal Bureau of Investigation (FBI), then called the Bureau of Investigation, became interested in Barrow and his paramour late in December 1932 through a singular bit of evidence. A Ford automobile, which had been stolen in Pawhuska, Oklahoma, was found abandoned near Jackson, Michigan in September of that year.

At Pawhuska, it was learned another Ford car had been abandoned there which had been stolen in Illinois. A search of this car revealed it had been occupied by a man and a woman, indicated by abandoned articles therein. In this car was found a prescription bottle, which led special agents to a drug store in Nacogdoches, Texas, where investigation disclosed the woman for whom the prescription had been filled was Clyde Barrow’s aunt.

Further investigation revealed that the woman who obtained the prescription had been visited recently by Clyde Barrow, Bonnie Parker, and Clyde’s brother, L. C. Barrow. It also was learned that these three were driving a Ford car, identified as the one stolen in Illinois. It was further shown that L. C. Barrow had secured the empty prescription bottle from a son of the woman who had originally obtained it.

On May 20, 1933, the United States Commissioner at Dallas, Texas, issued a warrant against Clyde Barrow and Bonnie Parker, charging them with the interstate transportation, from Dallas to Oklahoma, of the automobile stolen in Illinois. The FBI then started its hunt for this elusive pair.