Days Of Rage: America's Underground, The FBI And The Forgotten Age Of Revolutionary Violence 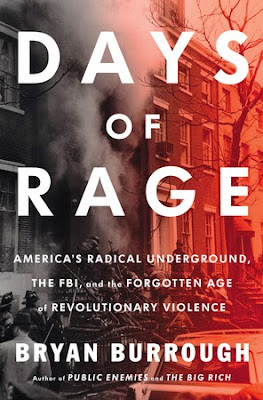 Gary Anderson offers a good review of Bryan Burrough's Days of Rage: America's Radical Underground, the FBI and the Forgotten Age of Revolutionary Violence for the Washington Times.

As a Marine Corps second lieutenant in 1971, the first article I wrote for the Marine Corps Gazette addressed the real possibility of an urban civil war in which the military might be called on to fight radical elements of my own generation who were advocating and actively working for the violent overthrow of the United States government. Looking back over four decades, my concern now seems unwarranted, but at the time, it was a very troubling possibility. Most Americans who lived through the era want to forget its violent antics, but author Bryan Burrough believes they should be documented. “Days of Rage” is his attempt to do so. He probably gives us more information than we need to know, but it is an instructive read for those who are interested.

Mr. Burrough chronicles how extreme elements along with the predominately benign flower power and civil rights movements morphed into homegrown terrorist groups attempting to foment the violent overthrow of the U.S. government. Their brief period in the limelight, and their eventual fade into irrelevance and obscurity, are now a historical oddity. Unlike the Civil War, there are no “Lost Cause” legends; nor are there Daughters of American Seventies Radicals organizations to keep the myth alive.

Until the present millennials, the baby boom generation was perhaps the most pampered that the nation had ever produced. Concerned that their children should never have to live through the Depression of their youth, parents tried to give their offspring what they themselves didn’t have as children. By the time my generation was college age, many fell prey to the hedonism of sex, drugs and rock ‘n’ roll. Faced with a war in Vietnam, many males justified their avoidance of it by claiming that the war was immoral. Crowds chanted, “Ho, Ho, Ho Chi Minh, the NLF is going to win!” and waved Viet Cong flags at the troops. That protest movement morphed into the more radical Weathermen, and finally to the extreme violence of the Weather Underground.