Ross Macdonald On How America Fell For The Private Eye 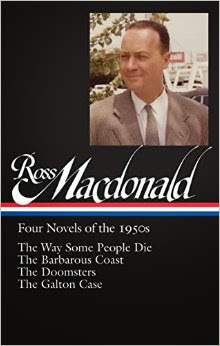 Ross Macdonald belongs on the Mount Rushmore of American mystery writers, alongside Edgar Allen Poe, Dashiell Hammett, and Raymond Chandler. He was also a connoisseur of the detective story, as he displays in this terrific 1965 Show magazine essay, “The Writer as Detective Hero,” one of a handful of nonfiction pieces that appear in a new Library of America anthology, Ross Macdonald: Four Novels of the 1950s, edited by Tom Nolan. If you are a fan of mysteries, this collection is a must, another beautiful and meticulous Library of America volume. Reprinted here with permission, this is a master given by a peerless practitioner.
—Alex Belth

A producer who last year was toying with the idea of making a television series featuring my private detective Lew Archer asked me over lunch at Perino’s if Archer was based on any actual person. “Yes,” I said. “Myself.” He gave me a semi-pitying Hollywood look. I tried to explain that while I had known some excellent detectives and watched them work, Archer was created from the inside out. I wasn’t Archer, exactly, but Archer was me.

The conversation went downhill from there, as if I had made a damaging admission. But I believe most detective-story writers would give the same answer. A close paternal or fraternal relationship between writer and detective is a marked peculiarity of the form. Throughout its history, from Poe to Chandler and beyond, the detective hero has represented his creator and carried his values into action in society.