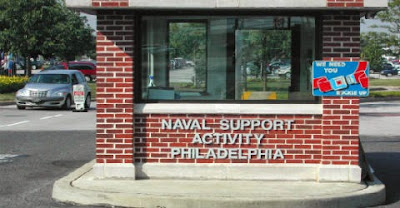 FoxNews.com reports that the U.S. Defense Department raised security levels for military bases due to a general threat from the terrorist group ISIS.

The U.S. military has raised its alert level for bases in North America to its highest since the 10th anniversary of 9/11 in the face of mounting threats from Islamic State sympathizers on American soil.

The move, which officials said is not based on a specific threat, was “informed by recent events,” a spokesman for U.S. Northern Command told Fox News.

The level, known as "Bravo," is the third of five levels of alert and means increased security at military posts across the country. A day earlier, FBI Director James Comey offered blunt remarks about the domestic threat from ISIS sympathizers, saying hundreds and possibly thousands of people in America are following ISIS on social media and consuming their "poison."

Note: The above U.S. Navy photo shows the main entry to the Naval Support Activity Philadelphia.

I spent the last ten years of my more than 37 years of service in the U.S. Navy and the Defense Department here. As the civilian administrative officer of a Defense Department tenant command on the naval base, I oversaw all command security programs. I was responsible for our force protection program, which provided all levels of security that protected our civilian and military personnel.
Posted by Paul Davis at 2:09 PM