Tale Of 1980s Spy Ring Broken In Tampa Getting Attention 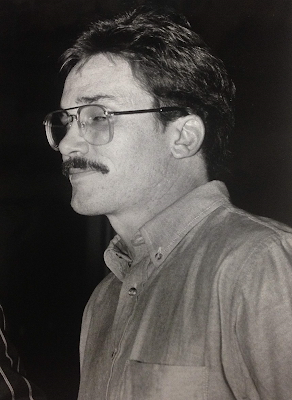 Elaine Silvestrini at the Tampa Tribune offers a piece on a 1980s spy story that will soon be a book and film.

During the Cold War, when the world was threatened with potential annihilation, when the United States and its allies faced the Soviet Union and its satellites in a high-stakes nuclear standoff, a group of American soldiers in Germany was giving the enemy secrets that could have crippled NATO.

The spy ring was discovered in the late 1980s. The investigation landed in Tampa, where FBI agent Joe Navarro and a team of dogged agents and analysts matched wits with Roderick James Ramsay (seen in the above photo), a former Army sergeant with a near-genius IQ who drifted from his mother’s trailer to a friend’s house and living out of his car.


The more-than-year-long relationship that developed between Navarro and Ramsay unlocked the secrets of a spy ring that had operated for decades, compromising the most sensitive intelligence on how the U.S. and its allies planned to protect Europe in the event of an invasion.
In the end, Ramsay went to prison, serving about 23 years before being released in 2013. He gave information that led to convictions for three other American military personnel who participated in the massive betrayal.
But for the most part, the case drifted into obscurity after the last of the suspects went to prison.

“I frankly was always surprised that it never got as much notoriety as I thought it should,” said Tampa attorney Greg Kehoe, who prosecuted Ramsay for the Justice Department, “because what these guys did so significantly compromised our NATO forces that I don’t know of another case in Europe that so placed as many soldiers in jeopardy as this breach of security.”

Now, 25 years after the case broke wide open, it may be about to get much more attention.


Actor George Clooney’s production company, Smokehouse Pictures, has purchased the rights for a book yet-to-be-written by Navarro and another author, to be called “Three Minutes to Doomsday.”

The book is pitched as “a real-life John le Carre thriller, telling the never-before-told story of how Navarro, by noticing and decoding a suspect’s trembling cigarette, led him to uncover the worst security breach in US history: a multi-generational spy ring that had put the U.S. on the brink of annihilation at the height of the Cold War; he describes the 42 interviews that entailed hundreds of hours of questioning and thousands of hours of preparation, the bureaucracy that questioned the veracity of the confessions he extracted and the ramifications of a year  of interviews and nine years of trials, which left Navarro emotionally, physically and spiritually exhausted.”