From The CIA Library: The Assassination Of Reinhard Heydrich - A Nazi Tyrant's Death At Patriots' Hands Revealed As Operation Salmon Of Czech Intelligence In Exile. 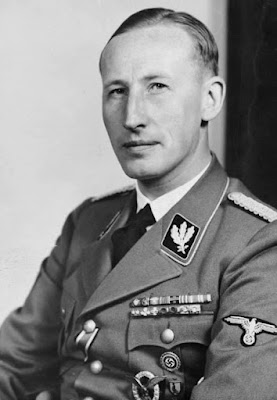 The CIA library released a long, unclassifed piece by R.C. Jaggers on the life and assassination of Reinhard Heydrich.

On the twenty-ninth of May, 1942, Radio Prague announced that Reinhard Heydrich, Reichsprotektor of Bohemia and Moravia, was dying; assassins had wounded him fatally. On the sixth of June he died.

Though not yet forty at his death, the blond Heydrich had had a notable career. As a Free Corpsman in his teens he was schooled in street fighting and terrorism. Adulthood brought him a commission in the German navy, but he was cashiered for getting his fiancée pregnant and then refusing to marry her because a woman who gave herself lightly was beneath him. He then worked so devotedly for the Nazi Party that when Hitler came to power he put Heydrich in charge of the Dachau concentration camp. In 1934 he headed the Berlin Gestapo. On June 30 of that year, at the execution of Gregor Strasser, the bullet missed the vital nerve and Strasser lay bleeding from the neck. Heydrich's voice was heard from the corridor: "Not dead yet? Let the swine bleed to death."

In 1936 Heydrich became chief of the SIPO, which included the criminal police, the security service, and the Gestapo. In 1938 he concocted the idea of the Einsatzgruppen, whose business it was to murder Jews. The results were brilliant. In two years these 3,000 men slaughtered at least a million persons. In November of that year he was involved in an event that in some inverted fashion presaged his own death. The son of a Jew whom he had deported from Germany assassinated Ernst von Rath in Paris. In reprisal Heydrich ordered a pogrom, and on the night of November ninth 20,000 Jews were arrested in Germany.

In 1939 the merger of the SIPO with the SS Main Security Office made Heydrich the leader of the Reichssicherheitshauptamt. In this capacity he ordered and supervised the "Polish attack" on Gleiwitz, an important detail in the stage setting for the invasion of Poland on September first. It was he who saw to it that twelve or thirteen "criminals" dressed in Polish uniforms would be given fatal injections and found dead on the "battlefield." It was probably he who chose the code name for these men--Canned Goods.