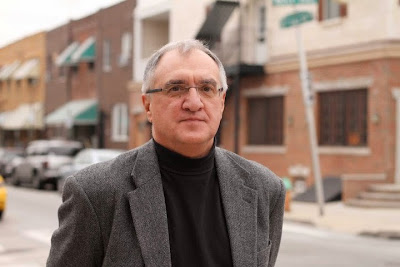 Veteran crime reporter and author George Anastasia (seen in the above photo) is covering the "rogue cops" federal trial for bigtrial.net.

The government wasn't interested in finding the truth, but merely in making a case.

That was the message delivered again and again today in closing arguments for the defense in the racketeering corruption trial of six Philadelphia Police Department narcotics investigators.

The jury, which is expected to begin deliberations sometime tomorrow, heard a steady stream of defense arguments built around attacking the government's case and the credibility of its witnesses, including more than a dozen admitted drug dealers and one dirty cop.

One defense attorney after another fired verbal shots at the prosecution.

It was, the jury was told, a "flawed" case built on "fables" not facts. Testimony came from "a parade of witnesses that looked like an audition for the Jerry Springer Show." The prosecution was "disingenuous in the extreme" and the six-week trial was an example of "innocent men being accused by guilty men."

Assistant U.S. Attorney Anthony Wzorek, who had the final word in the government's rebuttal closing late this afternoon, shrugged off the criticism, telling the jury the defense strategy was to "attack and distract" and that despite the emotional claims and high octave rants, the defense still was faced with one hurdle it could not overcome.

How was it possible, Wzorek asked, that Jeffrey Walker, the former narcotics cop turned government witness, told the FBI after his arrest in 2013 virtually the same stories of corruption that drug dealers  had recounted five or six years earlier?

The six defendants, all former members of the Police Department's Narcotics Field Unit, are charged with stealing more than $500,000 in cash, drugs and other valuables from drug dealers they had targeted and then fabricating police reports and arrest records to cover their tracks. The corruption extended from 2006 through 2012, the indictment alleges.