Reflections On Vietnam War - The Way We Were 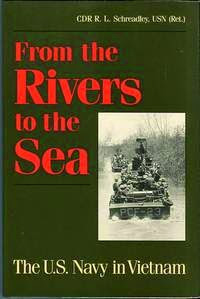 R.L. Schreadley, a retired U.S. naval officer and newspaper editor, and the author of From the Rivers to the Sea: The U.S. Navy in Vietnam, looks back on the Vietnam War in a piece in the Charleston Post-Courier.
There were nights on the river, away from the villages and towns, when the stars seemed close enough to touch. In a Swift Boat or a PBR, engines idling, drifting with the current, it was easy to forget the war and the enemy who might be waiting for you at the next bend of the river.
Sometimes your reverie was broken by the rumble and flash of distant artillery — or was it simply thunder and lightning? Sometimes a helicopter gunship appeared from out of nowhere to lash a village or the environs of a village with twin tongues of fire. At other times it was the sudden chatter of automatic weapons or the whoosh of a rocket that ended the dreaming.
And then you wondered: What the hell were you doing there? What the hell was the Navy doing there?
It’s been 40 years and 10 days since a North Vietnamese Army tank broke through an ornamental iron gate in central Saigon and led celebrating NVA troops to the very doorsteps of South Vietnam’s Presidential Palace.

This Marked the formal end of what was then America's longest war, a war that took the lives of some 58,000 U.S. soldiers, sailors and airmen.
Critics of the war, and I have been one of them, say that Vietnam was a war we should never have gotten into.
Where I differ with many, though, is my firm belief that once we were in there was only one honorable way to get out, and that was by achieving victory, a victory that could have been ours at a price far less than what we paid by suffering a humiliating defeat.
The ramifications of that defeat are with us still, in the bloody chaos we see in the Middle East and elsewhere in a world painfully lacking the leadership and calming presence America once provided.
You can read the rest of the piece via the below link:
http://www.postandcourier.com/article/20150511/PC1002/150519925/1021/america-x2019-s-failure-in-vietnam-resonates-in-chaotic-world
Note: You can also read my Counterterrorism magazine piece on a look back at the Vietnam War via the below link:
http://www.pauldavisoncrime.com/2012/02/look-back-at-vietnam-war-and-lessons.html
Posted by Paul Davis at 6:23 AM

Labels: From the Rivers to the Sea The U.S. Navy in Vietnam, R. L. Schreadley, The Charleston Post-Courier, Vietnam War