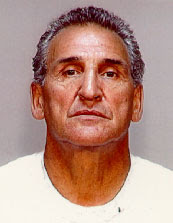 Now John Marzulli at the New York Daily News offers a piece on Vincent Asaro (seen in the above FBI mugshot), one of the suspects.

The Bonanno gangster charged with the infamous 1978 Lufthansa robbery allegedly blew his nearly $1 million share of the loot gambling at the racetrack, the Daily News has learned.

Federal prosecutors, in their most detailed disclosure to date about evidence against reputed capo Vincent Asaro, have revealed stunning secrets in the long-unsolved airport heist.

The feds have lined up an impressive roster of rats with knowledge of Asaro’s participation in the Lufthansa heist — immortalized in the classic film “Goodfellas.”