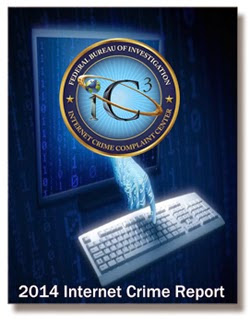 Today, the Internet Crime Complaint Center (IC3) released its annual report highlighting the numbers and common types of complaints it received during 2014 on suspected Internet fraud and other Internet-based crimes.

The report mentions two new trends that took shape during 2014: criminals increasingly taking advantage of personal data found on social media to start relationships with victims and scam them out of their money; and the emerging popularity of virtual currency, which has attracted perpetrators who capitalize on the vulnerabilities of the developing digital currency system.

According to the report, the IC3 adapted its approach to handling complaints during 2014: Analysts began reviewing more recent complaints first and then looked back at older submissions to better identify urgent threats, recognize new trends more quickly, and disseminate information to law enforcement and the general public based on the most recent data.

The IC3—which houses well over three million complaints from consumers in its database—continues to encourage anyone who thinks they’ve been the victim of an Internet crime, regardless of dollar loss, to file a complaint through the IC3 website. The more complaints it receives, the more effective it will be in helping law enforcement gain a more accurate picture of the extent and nature of Internet-facilitated crimes.

You can read the report via the below link: