Record-Breaking Seizure: Over 70 Kilograms Of Heroin, $2 Million Cash And Firearm Recovered In The Bronx 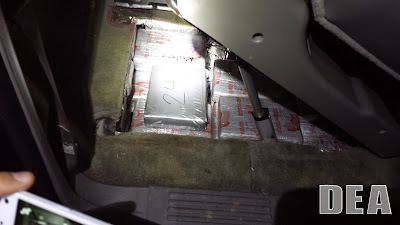 MAY 19 (MANHATTAN, N.Y.) - James J. Hunt, Special Agent in Charge of the U.S. Drug Enforcement Administration (DEA) New York Division; Bridget G. Brennan, New York City’s Special Narcotics Prosecutor; Raymond R. Parmer, Jr., Special Agent in Charge of the U.S. Immigration and Customs Enforcement’s (ICE) Homeland Security Investigations (HSI) New York; New York City Police Commissioner William J. Bratton; and Joseph A. D’Amico, Superintendent of the New York State Police, announced the arrest of four members of a narcotics trafficking network and the seizure of over 70 kilograms of heroin (154 lbs.) worth up to $50 million, plus $2 million in cash and a firearm. The massive load of narcotics and cash was recovered from a vehicle and an apartment in the Fieldston section of the Bronx, near Horace Mann School and adjacent to Van Cortlandt Park.

This is the largest heroin seizure in New York State in DEA history and the fourth largest heroin seizure in the U.S. It was the result of a yearlong investigation by the Office of the Special Narcotics Prosecutor and the DEA’s New York Drug Enforcement Task Force (NYDETF), Group T-31, which is comprised of DEA special agents, New York City Police Department (NYPD) detectives and New York State Police Investigators, and the ICE HSI-led El Dorado Task Force. The Yonkers Police Department and the Port Authority of New York & New Jersey also assisted.

On Sunday, May 17, agents arrested the head of the multi-million dollar heroin organization, Jose A. Mercedes, aka “Hippie,” and a second defendant, Yenci Cruz Francisco. Both are charged with Operating as a Major Trafficker and Criminal Possession of a Controlled Substance in the First Degree. Two additional defendants were arrested in November.

A court authorized wiretap investigation revealed that Mercedes and his drug trafficking group received sizable shipments of heroin at least once a month from suppliers in Culican, Mexico, an area controlled by the Sinaloa Cartel. The organization is believed to have served as a main source of heroin for customers throughout the five boroughs, as well as Connecticut, Massachusetts, Pennsylvania and Rhode Island.

In the days leading up to the seizure and arrests, intercepted phone conversations suggested the organization was expecting delivery of a large load of heroin over the weekend. Agents set up surveillance outside 210 West 251st St. in Fieldston, where the organization was suspected of maintaining a stash location in Apt. 5E.

Late Saturday, agents tracked a Chevrolet Suburban and a Honda Accord driven by Mercedes, Cruz Francisco and a third individual as they travelled from 210 West 251st St. to an industrial parking lot off of Interstate 287 in Montville, N.J. The vehicles entered a section of the industrial lot where tractor-trailers were parked. After more than an hour, the Chevrolet Suburban and Honda Accord headed back to the Bronx.

Upon reaching 210 West 251st St., the Chevrolet Suburban was parked in a gated parking lot behind the building. At the request of the NYDETF, the Yonkers Police Department dispatched a K-9 Unit and obtained a positive hit for narcotics on the Chevrolet Suburban. Agents maintained surveillance at the location.

On Sunday morning, agents observed Mercedes arrive in a Kia Sorrento and stopped him for questioning. Several large bags containing a tan powdery substance were recovered from the front seat of the car and from a hidden compartment in the center console. At least one of the bags tested positive for heroin.

Subsequently, agents observed Cruz Francisco leave 210 West 251st St., enter the Chevrolet Suburban and start the engine. Agents stopped him and obtained a court authorized search warrant for the vehicle. A hidden compartment under the floor of the vehicle contained 70 rectangular-shaped kilogram packages of heroin labeled with the identifying name of “Rolex.” Also inside the vehicle was $24,000 cash.

Agents conducted a series of court authorized searches at apartments associated with the group. Inside 210 West 251st St., Apt. 5E, agents recovered $2 million from underneath the floorboards. A search of 830 Magenta St., Apt. 2J, in the Bronx yielded a .380 caliber firearm.

Last night Jose A. Mercedes and Cruz Francisco were arraigned in Manhattan Criminal Court and held without bail, with their next court date set for Friday, May 22.

Two additional members of the narcotics trafficking group were previously charged on November 17, 2014. Mercedes’ son Jose Mercedes, JR. and defendant Juan Infante were arrested at 2851 Webb Ave., Apt. 1D, in the Bronx, where members of the NYDETF and HSI seized another 10 kilograms of heroin (22 lbs.) that had been hidden in a compartment inside a wall. An indictment filed by the Special Narcotics Prosecutor’s Office charges both with Criminal Possession of a Controlled Substance in the First Degree, Criminal Possession of a Controlled Substance in the Third Degree and two counts each of Criminally Using Drug Paraphernalia in the Second Degree.

DEA Special Agent in Charge James J. Hunt stated, “Seventy kilograms of heroin was intended to be distributed throughout the Northeast, proving that NYC is the bull's eye for drug traffickers and heroin is their weapon.  Record breaking aside, this investigation and seizure are messages to our communities that DEA and our law enforcement partners are doing our part in fighting opioid addiction that is afflicting our nation, by seizing the heroin that drug traffickers are pushing into our city."

Bridget G. Brennan said, “The $50 million street value of the heroin in this case is a conservative estimate. To put it in perspective, this load was so large it carried the potential of supplying a dose of heroin to every man, woman and child in New York City. While this important seizure stopped a huge amount of heroin from flooding our city, it also highlights the critical need to intercept heroin before it ever reaches our region.”

“These millions of doses of heroin and millions of dollars represent much more than just a seizure. They represent violence, overdoses, crime, death and the suffering of our communities,” said Raymond R. Parmer Jr., Special Agent in Charge of HSI New York. “HSI and our federal, state and local law enforcement partners are determined to put an end to the heroin epidemic plaguing our neighborhoods.”

Police Commissioner William J. Bratton said, “I want to thank the investigators of the New York Drug Enforcement Task Force and the prosecutors of the Office of the Special Narcotics Prosecutor whose work resulted in this significant heroin seizure.  The NYPD will continue to collaborate with our law enforcement partners to stop this dangerous and highly addictive drug from being sold in our neighborhoods and destroying lives.”

"This case will have a significant impact on the drug trade in New York State and throughout the Northeast, by keeping this large load of heroin out of our communities," said New York State Police Superintendent Joseph A. D'Amico. "The State Police remain committed to working with our partners in law enforcement and using every resource available to shut these drug operations down. We continue to send a clear message to those dealing these dangerous and deadly drugs -- you will be found, you will be prosecuted and you will go to prison."

The charges and allegations are merely accusations and the defendants are presumed innocent until proven guilty.
Posted by Paul Davis at 1:05 AM