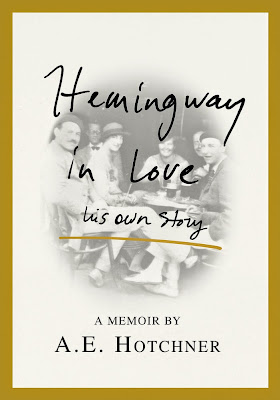 Sarah Hughes at the British newspaper the Guardian offers a piece on A.E. Hotchner's new book about Ernest Hemingway.

Ernest Hemingway’s troubled life and tangled loves have fascinated readers throughout the decades since his suicide in 1961. Now a new book promises to provide the definitive word on the writer’s time in 1920s Paris.

Focusing on the tumultuous period when he split from his first wife Hadley and took up with American journalist Pauline Pfeiffer, Between Two Women: Hemingway in Love, a memoir by long-time Hemingway confidant AE Hotchner, draws on years of taped interviews between the two men. They include several long conversations in the last weeks of the writer’s life, and paint an evocative picture of a man tormented by the memories of his first marriage and the notion that he had never been as happy as he was when young and impoverished in Paris.

The book also touches on the author’s relationships with his third and fourth wives, war reporter Martha Gellhorn and journalist Mary Welsh, and his three sons, Jack, Patrick and Gregory, in addition to painting a fascinating picture of his intense, complex friendship with fellow writer F Scott Fitzgerald.


Hotchner, now 94, was something of a fourth son to Hemingway, spending many hours in conversation with the author during his later years, a period he wrote about in his first memoir, Papa Hemingway, in 1966. It was published five years after Hemingway, newly released from the Mayo Clinic where he had been treated for depression and paranoia, shot himself at his home in Ketchum, Idaho.

Certain conversations were omitted from that memoir out of sensitivity to those still alive, and it is these communications, often dark and obsessive, sometimes sharply funny, always passionately alive, that Hotchner recounts in Between Two Women. “What makes this book extraordinary is that it’s the last chance we have to hear from someone who had that connection with Hemingway, who sat and talked to him,” says Paul Baggaley, publisher at Picador, who will bring the book out in the UK this autumn. “It’s a very compelling story, not least because the author has given an initial account so long ago which first set up the myth of Hemingway, and this can be seen as both a companion and also a corrective in some ways.”

Note: You can also read my Crime Beat column on Hemingway on crime via the below link: