Herman Wouk's New Book, 'Sailor And Fiddler: Reflections Of A 100-Year-Old Author,' Coming Out In December 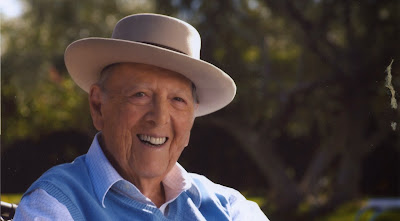 NEW YORK (AP) - As he nears his 100th birthday, Herman Wouk has a book planned with a title permitted only to a man of his age.

Wouk’s “Sailor and Fiddler: Reflections of a 100-Year-Old Author” is coming out in December, Simon & Schuster told The Associated Press on Friday. The book will cover his years in the Navy during World War II, inspiration for his Pulitzer Prize-winning novel “The Caine Mutiny,” and will include reflections on his Jewish faith, a recurring theme in his work.

You can read he rest of the piece via the below link:

Note: I'm a huge fan of The Caine Mutiny. I'm a Navy veteran and I've read the novel several times and seen the film several times. I also saw the play with my wife when it was staged in a real courtroom at City Hall in Philadelphia.
Posted by Paul Davis at 7:09 PM