Ministers At War: Winston Churchill And His War Cabinet 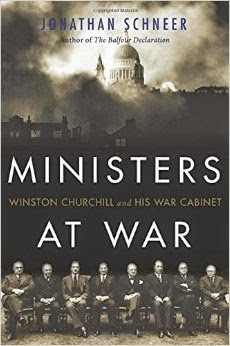 How nervous was an unprepared Great Britain about a possible German invasion in 1940? The fears were made plain in a memo that Winston Churchill sent to the War Office soon after being made prime minister.

Churchill noted the British military had a mortar “which is capable of throwing an ordinary bottle — for example, a beer bottle — 150 yards or more. These bottles could be filled with high explosives.” He also suggested that commercial vans could be enforced and converted into “rolling pill boxes.”

The British military, of course, pulled up its socks in short order. The Germans never came close to invasion, and the beer bottles remained unlaunched. The national perseverance under duress was largely due to Churchill’s leadership, as Nathan Schneer, a history professor at Georgia Tech, documents in a fascinating work containing some of the best academic writing I have ever encountered.

Britain certainly needed firm leadership to replace the bumbling Neville Chamberlain, who set a record for inept “statesmanship” in his negotiations with Hitler during the 1930s. Mr. Schneer’s account of the political maneuvering that led to Churchill’s ascension should fascinate even readers who care naught for British politics.