P.J. O'Rourke Rips 'Buckley And Mailer: The Difficult Friendship That Shaped The Sixties' 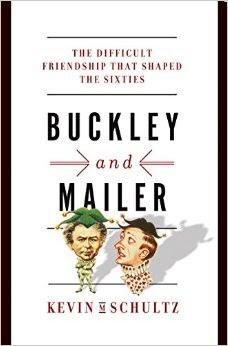 I was a teenager and a political conservative in the 1960s (although in other aspects I was far from conservative) and I read William F. Buckley's newspaper column and his political books. I also watched him on his PBS TV show, Firing Line. In later years I read and enjoyed his spy thrillers. He was a huge influence.

In the 1960s I also read Norman Mailer's novels and nonfiction work. I didn't agree with his worldview, but I thought he was an interesting writer. I also thought Mailer's The Executioner's Song  was an outstanding true crime book.

Having read both authors and having watched the two brilliant men debate on Firing Line, I was initially very interested in reading Kevin M. Schultz's Buckley and Mailer: The Difficult Friendship That Shaped the Sixties.

But having now read P.J. O'Rourke's book review in the Washington Post, I'm not so sure.

In fairness, telling the story of two men who liked each other is difficult if you don’t like one of them. Schultz detests Buckley.

“ . . . a salesman’s eyes, as though Buckley were trying to sell something he knew you didn’t really want to buy.”

... Schultz’s subtitle says it all — wrong. “The Difficult Friendship That Shaped the Sixties.” The adjective, the verb and the nouns are incorrect.

Schultz is a historian of the ’60s. I was there. William F. Buckley did not shape the ’60s and would have been appalled to be accused of it. Buckley, who led conservatism’s long march from cocktail-hour mixed nuts to political main course, shaped the ’80s and, to an extent, the ever-since.

Norman Mailer did not shape the ’60s. Prosperity, pot, the pill and the draft did. Mailer was an artist; he shaped all of creation. But he had little direct influence on we who fancied ourselves members of the Armies of the Night. And Mailer considered us to be lost in the dark, anyway. Buckley and Mailer together can hardly be said to have done what Buckley and Mailer separately did not do.

... I met Buckley a number of times and owe him a boatload of praise. He was a mainmast of courtesy, an anchor of encouragement and a spinnaker of enthusiasm for whatever one had written. And he knew what it was. The man must have read everything, including National Lampoon. My first contact with Bill was in the mid-’70s, a personal note lauding something I’d done, maybe “Why Fluoride in Water Turns Kids Into Commies.” (Infrequent need to go to the dentist means fewer salutary waiting-room exposures to hard-line Cold War articles in Reader’s Digest.)

Only once did I get a chance to talk to Mailer at length. We were seated near each other at a dinner party. “The Executioner’s Song” had just been published. I asked Mailer if Gary Gilmore’s inamorata, Nicole Baker, had as much je ne sais quoi and you-know-what as it seemed. The answer was: did she ever.