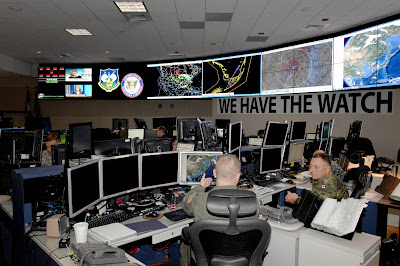 WASHINGTON, May 8, 2015 - The commander of U.S. Northern Command has elevated the force protection level for all Defense Department facilities in the continental United States, but not because of a specific threat, Pentagon spokesman Army Col. Steve Warren said here today.

Force protection condition levels, or FPCON levels, range from Alpha, which applies when an increased general and unpredictable terrorist threat exists against personnel or facilities, to Delta, which applies in an immediate area where a terrorist attack has occurred or is imminent.

Today, Northcom raised the force protection level at all DoD facilities nationwide from Alpha to Bravo. Bravo applies when an increased or more predictable threat of terrorist activity exists.

"I won't go into the specifics of what that means because it is information that a potential adversary could use against us," Warren said.

"As far as what the American public can expect to see," Warren said, "broadly speaking there won't be a change, but in specific areas there could be longer lines as personnel enter posts, camps and stations around the nation, [and this] could have traffic implications."

At Northcom in Colorado Springs, Colorado, spokesman Air Force Master Sgt. Chuck Marsh said that raising the baseline force protection condition "was a prudent measure to remind installation commanders at all levels within our area of responsibility to ensure increased vigilance in safeguarding our DoD personnel, installations and facilities."

The raised FPCON level is in addition to random drills or exercises performed at all DoD facilities, Marsh added, "and they're all a means to insure that we effectively execute our force protection mission."

The FPCON level was raised at this time because of a general environment of heightened threats, he said.

"This is the new normal," Marsh said, "so we're going to be doing random security [protection] measures ... to be able to best execute the safety and security of our people and our facilities."

According to Northcom, the commander last raised the FPCON level from Alpha to Bravo in 2011 in preparation for the 10th anniversary of the terrorist attacks of September 11, 2001.

At the Pentagon, Warren said, the FPCON level has been at Alpha but "with selected measures from Bravo in effect. Now it's Bravo."

This is an acknowledgement, Warren added, that "right now we believe the threat level nationwide has increased."

According to Northcom, the potential for another attack is always possible and implementing random force protection measures is one way to minimize the likelihood of an attack on an installation or service members.

"Some of you can see for yourselves -- you can look at Twitter or at other social media sites and see threats," Warren said.

Warren added, "It's as if the temperature of the water has gone up a degree or two."

Note: In the In the above photo by Mike Kucharek, members of U.S. Northern Command and the North American Aerospace Defense Command monitor systems and networks in the NORAD and Northcom Command Center on Peterson Air Force Base in Colorado Springs, Colorado, April 29, 2014.
Posted by Paul Davis at 7:55 PM