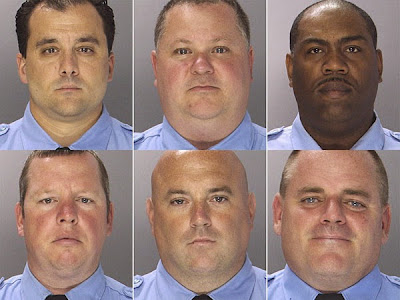 Veteran crime reporter and author Ralph Cipriano is covering the federal trial of six Philadelphia narcotics cops (seen in the above Philadelphia Police photos) for bigtrial.net.

It was a complete repudiation of the government's racketeering case against six former narcotics officers.

When the jury foreman sat down, there was a roar of approval from  courtroom spectators that could be heard out in the hallway. After a ten-month legal ordeal, all six defendants were getting ready to walk out of the federal courthouse as free men.

The last defendant to leave was former Officer Thomas Liciardello, who has spent the past ten months in solitary confinement while the other defendants were out on bail.

The six members of the narcotics field unit were charged in a 26-count federal indictment with allegedly using their positions to run a criminal enterprise. The rogue cops, the feds said, robbed and beat drug dealers they arrested out of at least $500,000 worth of cash and drugs. The money and drugs were allegedly stolen over a six-year period, between 2006 and 2012. The feds also accused the cops of falsifying police reports to cover their tracks.