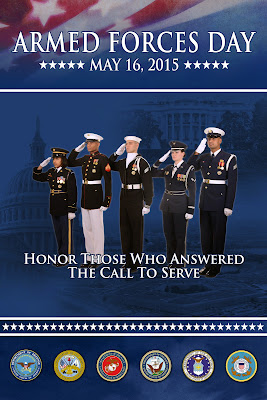 Today is Armed Forces Day and the DoD News released the below:

WASHINGTON, May 16, 2015 - In a written statement marking the 65th annual Armed Forces Day, Defense Secretary Ash Carter said the occasion is a reminder of why American men and women in uniform "comprise the finest fighting force the world has ever known."

"They not only continue to defend our country with unmatched skill and devotion; they also help make a better and more peaceful world for our children," Carter wrote.

Today is a day to be especially mindful of the nearly 200,000 service members currently beyond our shores protecting America's interests, the defense secretary said.

"In the Asia-Pacific where new powers rise, old tensions still simmer, and half of humanity resides they are responding to disasters and standing up for a continuation of the decades-long miracle of development and progress underwritten by the United States," Carter said.

"And in cyberspace, they are standing with those who create and innovate against those who seek to steal, destroy, and exploit," he said.

"To the more than two million soldiers, sailors, airmen, Marines, and Coast Guardsmen who defend the United States of America, we thank you and your families for answering the call to serve," the defense secretary said.

"Know that DoD's senior leaders and I are as committed as ever to safeguarding you, to ensuring you're treated with dignity and respect, and, above all, to ensuring that when you're sent into harm's way, it's done with the utmost care.

"Today, and every day, we are grateful for what you do," Carter said.
Posted by Paul Davis at 1:17 PM