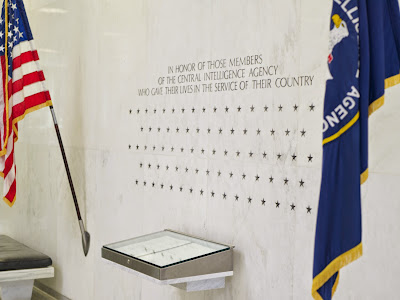 The CIA released the below information on May 18th:

The Central Intelligence Agency today paid tribute to the women and men of the Agency who have died in the line of duty—courageous Americans who made the ultimate sacrifice for their country. Two additional stars were added to the Memorial Wall this year. CIA dedicated the Memorial Wall 41 years ago. Today, there are 113 stars on the wall.

At today’s ceremony in the lobby of CIA headquarters, Director John O. Brennan stood before the Memorial Wall and welcomed the families and friends of our fallen officers. “For as long as this Agency endures, we will never shy away from the risks that must be taken to protect America and to further freedom’s cause,” he said. “Today, we pay tribute to our heroes who accepted those risks and placed themselves in harm’s way, expecting neither praise nor fame in return.”

Director Brennan spoke at length about the extraordinary lives and dedication of the heroes whose recently-added stars honor their service to our country, while their identities and relationship to CIA remain classified. Director Brennan concluded by saying the officers’ memories summon the “very best in each and every one of us. And just as they helped build a safer, better world, so shall we.”

During the ceremony, Director Brennan presented the families of the two officers with a marble replica of their loved one's star.

The memorial ceremony is attended each year by hundreds of employees, retirees, and family members and friends of those who died in service with the CIA.
Posted by Paul Davis at 12:06 AM