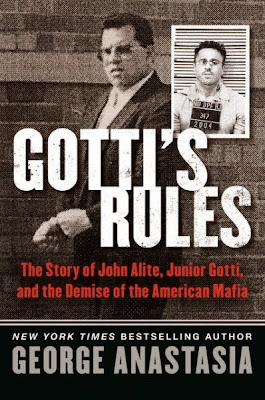 Gary Busio at the New York Post reports on a new kind of mob war.

Instead of using brickbats or Berettas, relatives of notorious Mafia boss John Gotti are delivering a beatdown to a former Gambino enforcer the 21st-century way — on the Internet.

“U go to war with one of us u go to war Witt [sic] all of us simple as that,” declared John “Junior” Gotti’s son John Gotti Jr. on Twitter March 25.

The tweet is just one example of an escalating and bizarre online barrage — which includes phony Twitter accounts, altered Wikipedia pages and doctored YouTube videos — targeting John Alite, who says the Gottis have relentlessly bullied him online ever since he was featured in a book titled “Gotti’s Rules: The Story of John Alite, Junior Gotti, and the Demise of the American Mafia,” which came out Jan. 27.

You can also read my Philadelphia Inquirer review of George Anastasia's book on John Alite via the below link:

http://www.pauldavisoncrime.com/2015/02/my-philadelphia-inquirer-review-of.html
Posted by Paul Davis at 10:48 AM