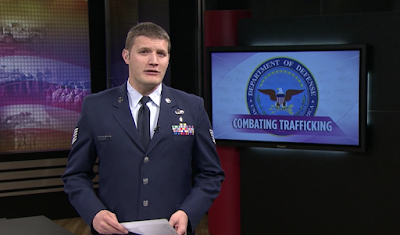 WASHINGTON, Jan. 15, 2016 — The signs of human trafficking could be all around Defense Department personnel: A subcontractor withholds passports and delays payment to its employees, or a company forces potential workers to pay a large fee to obtain a contract job on a DoD installation.

DoD wants its service members, civilians, contractors and others associated with the agency to be able to recognize the signs of human trafficking and know how to report suspected violations, he said.

Human trafficking includes using force, fraud or coercion to compel a person to provide labor, services, or sex, Burris said. It is a violation of basic human rights, he said. It is a global problem; it happens in the United States and around the world.

"This is a heinous, awful thing that happens. It's very important that we eradicate it," he said.
The three most common forms of trafficking, according to the DoD's Combating Trafficking in Persons office, are labor trafficking, sex trafficking, and child soldiering.

DoD relies on contractors at installations around the world, Burris said. The human trafficking violations the agency sees most often, he said, are labor abuses involving debt bondage.

Debt bondage is when a person is required to pay a large fee to obtain a job, putting the person in extreme debt in which the individual works a year or more just to pay off the debt, Burris explained.
The contract workers on bases are the ones who make meals, pump gas, or do other tasks to support the military, he pointed out. They face dangers as well, he said, including indirect fire at installations in warzones. They must be treated fairly and in accordance with laws and DoD regulations, he said.

Five-hundred people, including service members from Army and Air Force South, U.S. Special Operations Command, and the 1st Armored Division and Acquisition and Financial Management professionals, will take part in a joint, interagency exercise in March and April 2016 at Fort Bliss, Texas.

A focus of the Operational Contract Support Joint Exercise includes scenarios in human trafficking, Burris said. The exercise will evaluate current policies and approaches via the DoD supply chain.
"It's especially important because it is happening worldwide," Burris said. "It's something that we need to take a look at and make sure our people know."

The exercise includes Army South partner nations. They will observe human trafficking and Operational Contract Support training to incorporate lessons into next year’s U.S. Southern Command’s PANAMAX, he said. Scenarios are based on coalition forces responding to an armed conflict and follow-on stabilization operations.

The exercise will use role player scenarios so participants will better recognize signs of human trafficking, and what actions should be taken, Burris noted.

"We have to keep an eye out and be able to identify these signs, and that's why the training presents this in our exercise," he said.

Members of the military and DoD civilian personnel are required to take at least one Combating Trafficking in Persons training course every fiscal year. Specialized training is available for service members, law enforcement personnel, senior leaders and contracting professionals.

Signs are posted around military bases so workers know their rights, Burris said. DoD has supplemental exercises each year on fighting human trafficking.