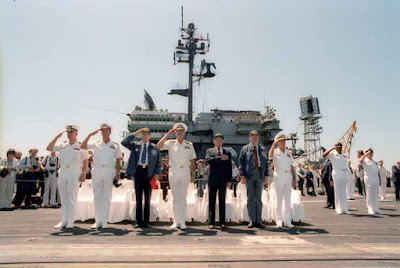 The Wall Street Journal offers President Reagan's remarks on the U.S. Navy while visiting the aircraft carrier USS Constellation in 1981.

Today, military adventurism and subversion threaten in faraway areas of the world. Providing security for the United States is the greatest challenge and a greater challenge than ever, but we’ll meet that challenge. We’re committed to a 600-ship Navy, a Navy that is big enough to deter aggression wherever it might occur. Let friend and foe alike know that America has the muscle to back up its words, and ships like this and men like you are that muscle.

You can also read my interview with President Reagan's Navy Secretary, John Lehman, via the below link: 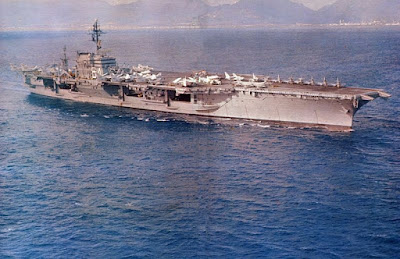 Note: The above White House photo shows President Reagan aboard the aircraft carrier U.S.S. Constellation watching a weapons training exercise with Captain Dennis Brooks, Admiral James Watkins and other Naval officials and Ed Meese. 8/20/81. The bottom photo is of the USS Constellation at sea.
Posted by Paul Davis at 12:33 AM