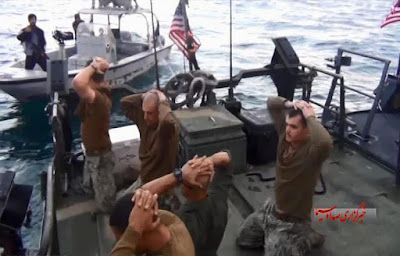 
The Obama administration rushed Wednesday to portray the swift return of 10 U.S. sailors taken captive a day earlier by Iran as a vindication of the president’s diplomatic outreach to Tehran, but a video showing the disarmed, kneeling American sailors being watched by Iranian guards and one of the sailors apologizing to his captors quickly undercut the administration’s self-congratulatory message.
The broadcast of the video on Iranian state TV showed how Tehran seized on the incident to score propaganda points at home before returning the sailors to the American Navy fleet in the Persian Gulf.
U.S. officials acknowledged the two Navy boats were detained after they inadvertently strayed into Iranian waters. In one clip, a U.S. sailor that Iranian state TV dubbed as the commander of those taken captive, said: “It was a mistake, that was our fault, and we apologize for our mistake.”
The incident came at a sensitive moment for both the Obama administration and Iran amid the final push to implement the deal struck last summer designed to curb Iran’s suspect nuclear programs while easing international economic sanctions on Iran. With the Obama administration claiming that sweeping sanctions relief for Iran is just days away, and Iranian authorities claiming to have done everything to keep up their end of the accord, both were seen to be carefully spinning the incident — lest it derail the deal’s impending implementation.
But critics said Wednesday that the video and the treatment of the sailor was just the latest example of Iran exploiting the Obama administration’s willingness to tolerate Iranian misbehavior and provocations in other fields to save the president’s prized nuclear deal. The seizure came in the wake of Iranian missile tests in October and December that have been condemned as violations of international sanctions.
You can read the rest of the piece via the below link: