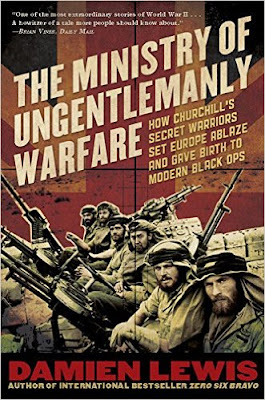 Veteran journalist and author Joseph C. Goulden offers a good review of Damien Lewis' The Ministry of Ungentlemanly Warfare for the Washington Times.


The British commando operation was so audacious that it could be rightly termed harebrained. With an assault team aboard, a sailing vessel disguised as a Swedish pleasure boat, the Maid Honour, traveled some 3,000 miles from England to the minuscule island of Fernando Po, a Spanish colonial territory off the west coast of Africa.
The island’s Santa Isabel Harbor was suspected of being a clandestine German U-boat refueling and rearming station. Three enemy vessels seemed permanently berthed there, one flying the German swastika. An 8,000-ton Italian passenger liner, the Duchessa d’Aosta, was believed to carry spare parts for submarines. Also present was a German tugboat, “the perfect kind of vessel for going to a crippled U-boat’s aid” and towing it to shelter.
Although Spain was formally neutral, its Franco government was neo-Fascist and a secretive supporter of the Axis powers. Any military action traceable to the British could cause Spain to shed its neutrality and seize the vital Allied base of Gibraltar. Prime Minister Winston Churchill and his war Cabinet decided that eliminating a submarine danger warranted the risk of riling Spain.
... Such is just one of the operations detailed by English military writer Damien Lewis in his sprightly account of selected capers of the British Special Operations Executive (SOE). The story began in 1940, as battered remnants of the British army fled Dunkirk. Realizing that his forces were incapable of battlefield combat with the Germans without rebuilding,Churchill sent an order to his military chiefs-of-staff: “Prepare hunter troops for a butcher-and-bolt reign of terror.” The operating agency, SOE, was a branch of the Secret Intelligence Service.
But this name was never mentioned. SOE was disguised as the innocuous-sounding “Inter-Service Research Bureau,” housed in nondescript quarters on Baker Street in London, referred to by insiders as “The Firm,” “The Org,” or “The Racket.”
You can read the rest of the review via the below link: