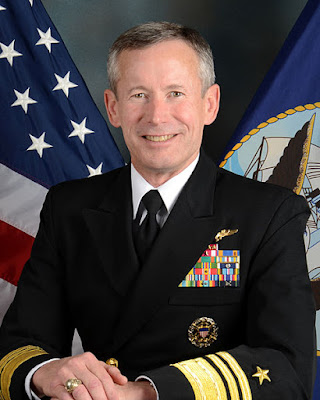 Craig Whitlock at the Washington Post offers a piece the Navy admiral who is in charge of naval intelligence, but can't access classified information due to his possible involvement with a bribery scandal and investigation .


For more than two years, the Navy’s intelligence chief has been stuck with a major handicap: He’s not allowed to know any secrets.
Vice Adm. Ted “Twig” Branch has been barred from reading, seeing or hearing classified information since November 2013, when the Navy learned from the Justice Department that his name had surfaced in a giant corruption investigation involving a foreign defense contractor and scores of Navy personnel.
Worried that Branch was on the verge of being indicted, Navy leaders suspended his access to classified materials. They did the same to one of his deputies, Rear Adm. Bruce F. Loveless, the Navy’s director of intelligence operations.
More than 800 days later, neither Branch nor Loveless has been charged. But neither has been cleared, either. Their access to classified information remains blocked.
Although the Navy transferred Loveless to a slightly less sensitive post, it kept Branch in charge of its intelligence division. That has resulted in an awkward arrangement, akin to sending a warship into battle with its skipper stuck onshore.
Some critics have questioned how smart it is for the Navy to retain an intelligence chief with such limitations, for so long, especially at a time when the Pentagon is confronted by crises in the Middle East, the South China Sea, the Korean Peninsula and other hot spots.
“I have never heard of anything as asinine, bizarre or stupid in all my years,” Norman Polmar, a naval analyst and historian, said in an interview.
You can read the rest of the piece via the below link: