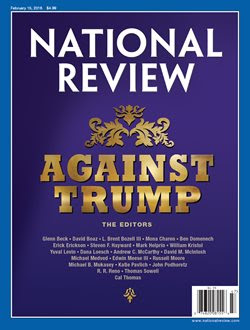 The editors of the influential conservative magazine National Review came out against Donald Trump.

Donald Trump leads the polls nationally and in most states in the race for the Republican presidential nomination. There are understandable reasons for his eminence, and he has shown impressive gut-level skill as a campaigner.

But he is not deserving of conservative support in the caucuses and primaries. Trump is a philosophically unmoored political opportunist who would trash the broad conservative ideological consensus within the GOP in favor of a free-floating populism with strong-man overtones.

Trump’s political opinions have wobbled all over the lot. The real-estate mogul and reality-TV star has supported abortion, gun control, single-payer health care à la Canada, and punitive taxes on the wealthy. (He and Bernie Sanders have shared more than funky outer-borough accents.) Since declaring his candidacy he has taken a more conservative line, yet there are great gaping holes in it.

... On foreign policy, Trump is a nationalist at sea. Sometimes he wants to let Russia fight ISIS, and at others he wants to “bomb the sh**” out of it. He is fixated on stealing Iraq’s oil and casually suggested a few weeks ago a war crime — killing terrorists’ families — as a tactic in the war on terror. For someone who wants to project strength, he has an astonishing weakness for flattery, falling for Vladimir Putin after a few coquettish bats of the eyelashes from the Russian thug. All in all, Trump knows approximately as much about national security as he does about the nuclear triad — which is to say, almost nothing.
You can read the rest of the piece via the below link: