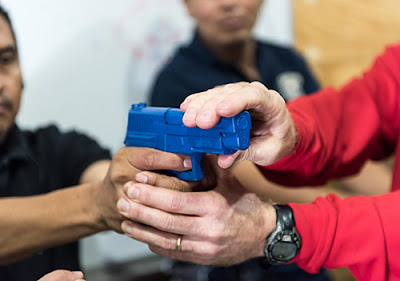 The FBI offers part two of a series on transnational gangs.


At the start of the FBI’s recent Central American Law Enforcement Exchange (CALEE) program, participants from U.S. police departments and their counterparts from Mexico, El Salvador, Honduras, Guatemala, Belize, and Panama were strangers, but they shared one thing in common: a commitment to make their communities safe from violent gangs such as MS-13 and 18th Street.
By the end of the three-week program, the men and women had overcome language barriers and become friends as well as partners—and they were armed with new resources to fight the transnational gang threat: a network of intelligence sharing, expanded contacts, and access to FBI-led task forces throughout Central America.
“There’s a synergy between the gangs that helps them grow and become stronger,” said Special Agent Jason Kaplan, the FBI’s legal attaché in El Salvador. “As law enforcement, we need to develop that same relationship with each other, because the gangs are doing it, and if we don’t we are going to fall behind.”
CALEE was developed in 2009 with that spirit of collaboration and partnership in mind. This year’s group of nearly 40 participants traveled to Los Angeles and Houston before spending a final week in El Salvador, where the MS-13 and 18th Street gangs have grown powerful and extremely violent. In each venue, participants received training and information about different jurisdictions’ approaches to managing their gang threat.

You can also read part one of the FBI series on transnational gangs via the below link:

http://www.pauldavisoncrime.com/2016/01/fbi-transnational-gangs-part-1.html
Posted by Paul Davis at 10:54 AM