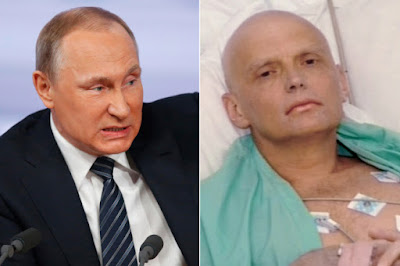 Yaron Steinbuch at the New York Post offers a piece on the murder of former KGB officer Alexander Litvinko in the United Kingdom.


The Russian government likely ordered Alexander Litvinenko’s assassination in part because he accused Russian President Vladimir Putin of being a pedophile, a British inquiry concluded Thursday.
In the 300-page report, retired High Court judge Sir Robert Owen said Putin “probably” ordered the hit against Alexander Litvinenko, and used his position as head of Russian intelligence to destroy video evidence of himself having sex with underage boys — which was “the climax” of a bitter feud between the two men.
Owen said the personal attacks were among the “powerful motives” for the assassination.
“I am satisfied that, in general terms, members of the Putin administration, including the president himself and the FSB [Russia’s Federal Security Service], had motives for taking action against Litvinenko, including killing him,” Owen wrote.
.. “The FSB operation to kill Mr. Litvinenko was probably approved by Mr. Patrushev, then head of the FSB, and also by President Putin,” Owen said.
You can read the rest of the piece via the below link:
http://nypost.com/2016/01/21/murdered-ex-spy-accused-putin-of-pedophilia/
Posted by Paul Davis at 2:08 PM