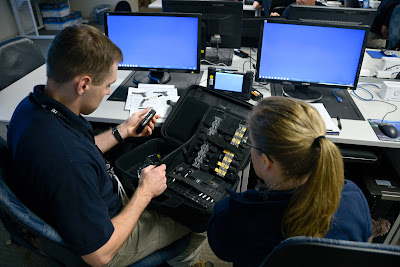 
Today’s special agents and intelligence analysts graduating from the FBI Academy are beginning their first assignments fully prepared for collaborative work in the field thanks to an innovative training program launched in 2015.
Dubbed the Basic Field Training Course (BFTC), the new program offers an integrated curriculum that places new agent and intelligence analyst trainees together in a squad-like environment—the way agents and analysts work in actual FBI field offices. During the course, trainees learn skills like conducting investigations, interviewing, and providing briefings. Their academic training culminates with criminal and counterterrorism exercises modeled after real-world scenarios.
“The BFTC serves as an important element of our continued efforts to improve collaboration throughout the organization,” said Mark Morgan, assistant director of the Bureau’s Training Division. “From their first days in the FBI, special agents and intelligence analysts sit side-by-side, wear the same uniforms, and learn the necessity of working as a single, integrated, cohesive team. This is an exciting shift in the way we do things.”
Prior to launching the BFTC, agents and intelligence analysts historically trained under separate programs. While the new program integrates trainees where appropriate, specialized courses are still provided to students based on what their roles will be in the field. For example, special agents are instructed on the fundamentals of operating firearms and tactical driving, while intelligence analysts are taught how to analyze emerging threats and provide intelligence reports.
“We changed the way our students learn by integrating special agent and intelligence analyst instructors in the classroom—the lessons are presented by a team,” said Zachary Lowe, chief of the Training Division’s Instruction Section. “Having great instructors with current field experience integrating intelligence and operations has been critical to the success of the BFTC.”
The first group of graduates to complete the new training course walked across the stage at the FBI Academy this past fall to receive their credentials. One of those graduates was Alexandra, who now serves in the field as an intelligence analyst. Like other students in her class, Alexandra felt the program provided her with an invaluable experience.
“There was a great deal of cohesion within our group. We didn’t see each other as agents and analysts—we were just one class,” she said. “Having this type of integrated training, I believe, is the right step for the future of the FBI. Since we’re going to be working together in the field, it only makes sense to start us off so that collaboration is the only thing we know.”
The BFTC was developed in response to a key recommendation made in the 9/11 Commission Report, which called for the FBI to integrate its workforce and implement a dedicated team approach to national security operations. The curriculum of the new program answers this call by providing trainees with the necessary building blocks to further the FBI’s dual law enforcement and intelligence mission.
“Students completing the course now have a broader knowledge base to help them acclimate to the workforce,” said Catherine Fletcher, chief of the Training Division’s Curriculum Management Section.
Fletcher’s group played an integral role in developing the program’s learning components. Numerous subject matter experts as well as Headquarters and field office personnel were enlisted to provide input on the fundamental aspects of the program. Once the course’s curriculum was produced, it was thoroughly reviewed to ensure the content was relevant, current, and met the needs of the FBI’s mission. In all, the program was built from the ground up over the span of three years.
“During the BFTC development process, we focused on areas that would deliver the foundational skills needed for agents and analysts to understand each other’s roles,” said Fletcher. “By bringing in specialists from the field, holding focus groups, and connecting to the FBI’s current policies and procedures, we believe that this new curriculum achieves the end goal of instilling a team culture.”
Now in its 10th month at the FBI Academy, the BFTC is providing hundreds of new agents and intelligence analysts with the tools to succeed in the field as a seamless unit. Over time, the program will continue to evolve as new investigative and intelligence-gathering techniques emerge.
“We all have a stake in this new holistic approach to training, and we’ll need to stretch and learn accordingly,” said Fletcher. “In the end, we’re working as equal partners to support the FBI and the intelligence community as a whole.”
Posted by Paul Davis at 8:53 AM