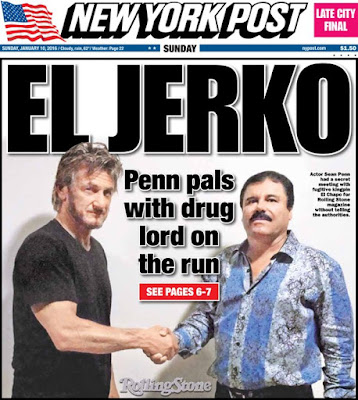 At least actor Sean Penn recognizes his true worth as a journalist.

As he noted in his Rolling Stone piece on meeting and (sort of) interviewing fugitive Mexican drug lord Joaquin "El Chapo" Guzman, he does not ask for money for his (sort of) journalism.

He's not a journalist, but he plays one in Rolling Stone, to paraphrase an old TV commercial. Of course, as an overpaid actor, he can afford to forgo payment.


El Chapo, meet El Jerko.
Hollywood blowhard Sean Penn secretly met, interviewed, and posed for grip-and-smirk selfies with murderous druglord Joaquin Guzman Loera — even as the world’s most-wanted fugitive continued to elude authorities in the months after tunneling out of a Mexican prison.
“I don’t want to be portrayed as a nun,” El Chapo says in the interview. Nevertheless, to gain access to the kingpin’s secret jungle hideout, Penn agreed that Guzman would have the final edit of the resulting story.
Penn also agreed not to alert authorities to the killer’s whereabouts. Still, Guzman’s capture in a dramatic police shootout Friday came as a direct result of Mexican officials tracking their contacts, authorities there said.
And Mexican officials now are investigating Penn and actress Kate del Castillo, who traveled with the actor to visit the vile drug lord, ABC News reported.
... In breathless, first-person prose, Penn marvels over El Chapo’s humble, hardscrabble childhood spent harvesting in the drug fields of Sinaloa state.
Scant mention is made of the river of blood in El Chapo’s wake, and none at all of his alleged assassinations of Mexican officials and police. Guzman is credited with responsibility for tens of thousands of deaths of rivals, informants and officials in Mexico and the US, his biggest market.
... But Penn was not afraid.
“I’d offered myself to experiences beyond my control in numerous countries of war, terror, corruption and disaster,” he assures the reader.

You can read the rest of the piece via the below link:
http://nypost.com/2016/01/09/el-chapo-met-sean-penn-before-his-capture-rolling-stone/