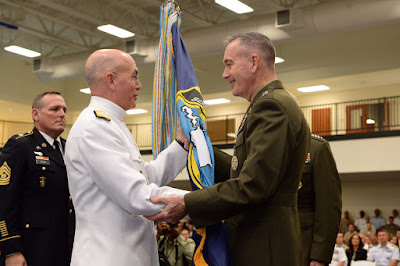 Lisa Ferdinando at DoD News offers the below link:

The command is vitally important to the United States and in promoting peace and stability in its area of responsibility, Navy Adm. Kurt W. Tidd said yesterday after taking command of Southcom.

"U.S. Southern Command has been safeguarding the interests of our nation for well over five decades," the admiral said, following the ceremony at Southcom's headquarters here.

The command is responsible for U.S. military operations in Central and South America and the Caribbean, an area of that covers more than 16 million square miles.

Southcom works extensively with interagency and regional partners to successfully execute its many missions, noted Marine Corps Gen. Joseph F. Dunford, Jr., the chairman of the Joint Chiefs of Staff.

The command conducts multi-national exercises, and is ready to respond to crises and contingencies, including natural disasters, mass migration or an attack on critical infrastructure, the chairman said.
Dunford described a scenario to illustrate the many areas of cooperation:

Then, the vessel might sprint into Panama's territorial waters, dumping its bales of cocaine along the way. A Coast Guard cutter with Drug Enforcement Administration agents on board might seize the drugs while Panamanian officials intercept the vessel and make arrests.

"In another area of responsibly, that kind of coordination and cooperation might be remarkable," the chairman said. "In the United States Southern Command, it's just another day."

Southcom, through its personnel and wide-ranging missions, is unique among combatant commands, according to Marine Corps Gen. John F. Kelly, who relinquished command of Southcom yesterday.

"It takes a ... unique set of talents to operate here in this part of the world," he said, noting that amongst its personnel, Southcom counts diplomats, human rights advocates and social and economic developers.

The command is comprised of five components and three joint task forces and employs about 1,200 permanently assigned military and civilian personnel.

The dedicated personnel should receive the credit for all the successes of the command, Kelly said.

"They have made a difference, not only for our country, but for our partner nations," he noted.