A Look Back At 'The Taking Of Pelham One Two Three' 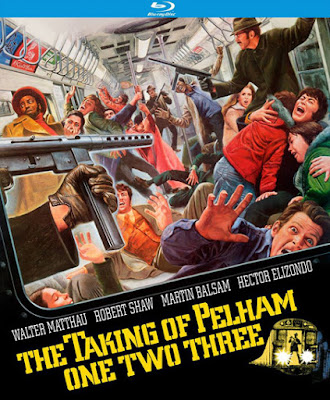 Jeremy Carr at Cinemaretro.com takes a look back at one of my favorite crime films, The Taking of Pelham One Two Three.

The Taking of Pelham One Two Three (1974) feels like a working man’s thriller. Its bad guys come from varying backgrounds—military, mafia, experience on just the type of train they are hijacking—but none of them are exceptionally slick or formidably imposing in a supervillain sort of way. There is no global catastrophe, no city under siege; there isn’t even a single building at risk of explosion or collapse. These men want $1 million. Period. Sure, they have kidnapped about two dozen hostages, but in an age now when cinematic baddies detain entire metropolitan regions, this arrangement seems almost quaint by comparison. Leading the attempt to thwart the four antagonists are a couple of guys just doing their job, as capably and confidently as they would any other day. Written by Peter Stone, based on John Godey’s (Morton Freedgood) novel, this model of 1970s American movie grit stands out in form and function for the way its unpretentious, low-key scheme is conceived of and enacted, and the systematic, procedural manner in which the plot is hindered by men with evident occupational know-how.

...Transit Authority police lieutenant Zachary Garber (Walter Matthau), who unwittingly yet naturally becomes the key hero of the film, is first seen dozing off. He then spends the first part of his day escorting some visiting Japanese dignitaries, giving them a guided tour of the New York City subway system, reciting a numerical spiel composed of dry, textbook knowledge. Played by Matthau with delightful cynicism and weariness, a year after his excellent turn in Charley Varrick, Garber subsequently contends with the bureaucracy of city management while doing his blue-collar best to negotiate with the hijackers.

Note: I didn't much care for the Denzel Washington remake of the film.
Posted by Paul Davis at 7:45 PM