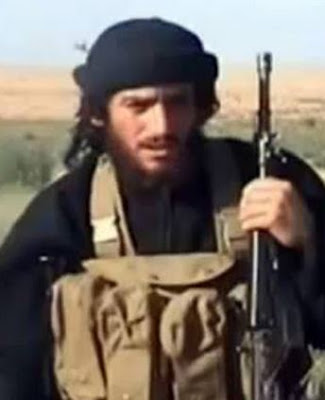 The U.S. Defense Department released the below statement:

Today coalition forces conducted a precision strike near Al Bab, Syria, targeting Abu Muhammad Al-Adnani (seen in the above photo), one of ISIL's most senior leaders. We are still assessing the results of the strike, but Al-Adnani's removal from the battlefield would mark another significant blow to ISIL. Al-Adnani has served as principal architect of ISIL's external operations and as ISIL's chief spokesman. He has coordinated the movement of ISIL fighters, directly encouraged lone-wolf attacks on civilians and members of the military and actively recruited new ISIL members. The U.S. military will continue to prioritize and relentlessly target ISIL leaders and external plotters in order to defend our homeland, our allies and our partners, while we continue to gather momentum in destroying ISIL's parent tumor in Iraq and Syria and combat its metastases around the world.
Posted by Paul Davis at 8:52 PM