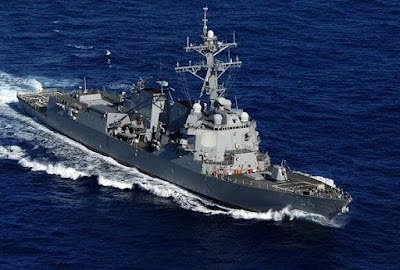 They don't call the USS Nitze a destroyer for nothing.

The ship is manned with multiple modern weapons systems and is quite capable of dispatching four Iranian boats, and much more, yet the risk-adverse civilian and military leadership at the helm in the Pentagon allowed this multi-million dollar warship to be harassed by the second-rate Iranian navy, just as the U.S. Navy allowed the Iranians to capture our boats and sailors a while back.

And, you may recall, Secretary of State John Kerry publicly thanked the Iranians for the humiliation.

Clearly, the Iranians - and the rest of the world - have no respect for the United States Navy.

You can read about the U.S.'s latest humiliation at the hands of the Iranians via the below link:

Note:  The USS Nitze appears in the above U.S. Navy photo.
Posted by Paul Davis at 10:31 PM