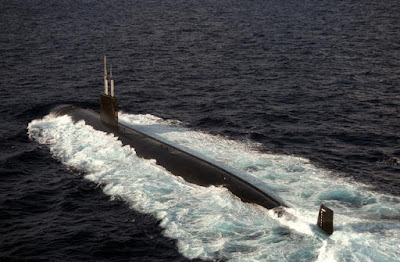 Marlisa Schultz at the New York Post offers a piece on the American sailor who is on trial for taking classified photos of his submarine and is asking for the 'Clinton Treatment' in his sentencing.


WASHINGTON – A 29-year-old sailor in the U.S Navy who admitted to snapping six classified pictures of his nuclear submarine is imploring a federal court judge to treat him as leniently as Hillary Clinton.
Kristian Saucier wants to be let off with probation at his sentencing Friday, arguing that the Democratic presidential nominee is not behind bars for mishandling even more classified material.
“It will be unjust and unfair for Mr. Saucier to receive any sentence other than probation for a crime those more powerful than him will likely avoid,” his lawyer, Derrick Hogan, wrote in a recent federal court filing in Bridgeport, Conn.
Saucier took six photos in 2009 inside the nuclear attack submarine, U.S.S. Alexandria (seen in the above U.S. Navy photo), that was in port in Groton, Conn. The photos were of classified and restricted areas that included the nuclear reactor.
There’s no evidence Saucier ever passed the photos to anyone and the sailor said it was “silly” mistake by a then 22-year-old.
You can read the rest of the piece via the below link:

http://nypost.com/2016/08/15/sailor-who-took-classified-photos-wants-the-clinton-treatment/
Posted by Paul Davis at 8:54 AM