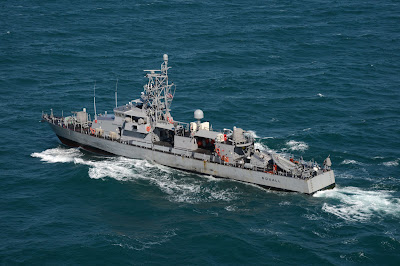 FoxNews.com reports that the USS Squall (seen above in the photo) fired warning shots at Iranian boats who were harassing U.S. Navy ships.


DEVELOPING: A U.S. Navy coastal patrol ship fired three warning shots at an Iranian ship that sailed within 200 yards in the Northern Persian Gulf Wednesday after one of four close calls this week involving U.S. and Iranian vessels, a U.S. official confirmed to Fox News on Thursday.
The USS Squall fired the shots, according to the official.
On Tuesday, four Iranian small boats "harassed" the USS Nitze, sailing near the guided missile destroyer in the narrow Strait of Hormuz, a U.S. Navy official told Fox News.