The War On Guns: Arming Yourself Against Gun Control Lies 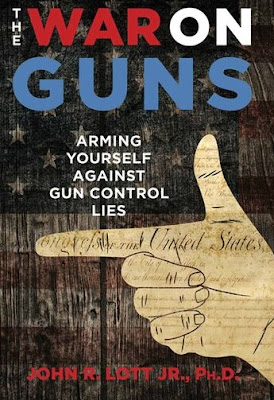 Joseph Greenlee offers a review in the Washington Times of John R. Lott's The War On Guns: Arming Yourself Against Gun Control Lies.


In his new book, “The War on Guns: Arming Yourself Against Gun Control Lies,” John Lott methodically dismantles one popular gun-control myth after another.
It has been said that a lie told often enough becomes the truth, and a similar phenomenon is overwhelming the gun debate in America. Oft-repeated untruths have formed common beliefs that often sway the debate about firearms. Gun-control advocates have learned that their exaggerated claims are likely to go unchecked by a largely sympathetic media, allowing them to control the narrative and shape public opinion.
What is more, as Mr. Lott explains, billionaire elitists like George Soros and Michael Bloomberg are spending hundreds of millions of dollars lobbying legislators, funding conclusion-driven research, developing “grass-roots” organizations, and literally training reporters to cover gun control issues the way they want them covered; the purpose being to negatively distort the public’s view of firearms so that there is less resistance when gun rights are taken away. There is an astonishing amount of money being poured into the gun-control movement, and the success of the movement will ultimately depend on how the public perceives the issues — meaning that facts are now more important than ever.
Thankfully, Mr. Lott has set the record straight in “The War on Guns.” In his usual methodical style, he answers the baseless rhetoric and hyperbole of gun-control advocates with facts and statistics. And better yet, in addition to providing an abundance of tables and graphs, Mr. Lott states his case in a way that is easy to comprehend so that the reader, too, can start setting the record straight when confronted with misinformation.
You can read the rest of the review via the below link: